MBPJ to provide free bus services | Malaysia | The Malay Mail Online: "“The operational hours will be during peak hours so that schoolchildren and working adults can benefit,” the mayor said.

With 10 vehicles serving for this inaugural free service, Alinah envisioned a five-minute frequency during peak hours and 10 minutes at off-peak.

She also said incentives were being worked out to encourage Petaling Jaya City Council (MBPJ) employees to take public transport.

“This will free up parking spaces in PJ New Town and surrounding areas, as well as reduce the number of bays needed,” said Alinah."
at 12:29 PM No comments:

The company was in the process of drafting the terms of reference for the lease of the new 15-metre longer buses, he said.

The bid for the bus supplier was expected to be carried out by next month and the delivery of the buses must be made before the end of this year, he said.

Mr Wuthichart said that next year the Transport Co plans to replace old buses with 269 more new buses."
at 12:11 PM No comments:

Thailand #publictransit-- more than beaches-- a draw for investors

FT.com: "Powerful draws for potential buyers here include the city’s central location in southeast Asia, the proximity of beautiful beaches and trekking areas, and the excellent dining options and nightlife. More important, perhaps, are the developing SkyTrain and Metro mass transit systems: traffic jams may be the longstanding bane of life in Bangkok, but getting around Sukhumvit (in the centre east of the capital, and a favoured location for expats), Silom and Sathorn (two adjacent upmarket districts in the centre south) has become easier thanks to improving public transport."
at 3:04 PM No comments:

Use public transport to reduce expenses

Free Malaysia Today: "So what can consumers do to reduce their monthly expenses? Since price for petrol is expensive, why not we opt for using public transport for a change? For those who live in Klang Valley or KL, it might probably be easier if they use public transport to travel from one place to another since there is a variety of public transport. Furthermore, the cost for highway tolls can be deducted from monthly expenses as well, besides having clear picture on transportation costs. Not to mention, traffic congestion will definitely be avoided by travelling using train such as LRT, KTM and Monorail."
at 12:52 PM No comments:

Project to show feasibility of using public transport in the city - Community | The Star Online: "IF EVERYTHING goes as planned, Petaling Jaya residents will be able to use a free bus service by the middle of this year.

The 28.2km route will start from the bus terminal in Jalan PJS 3/11 and will serve the Kampung Dato Harun KTM station, Asia Jaya LRT and Sections 14 and 16. Other areas covered include the Universiti Malaya Medical Centre (UMMC) and PJ Old Town.

...PJS 2 Taman Dato Harun Residents Association chairman Shamsury Joha also hopes the new buses will reduce the number of cars on the road. “During the morning rush hour, there are a lot of single-occupant vehicles,” he noted.

Seksyen 1B Rukun Tetangga chairman Kok Kuan Yong was concerned about how genuine Petaling Jaya residents would be identified for eligibility. “Many people come to Petaling Jaya for work or run errands. “Even if you use assessment records, how are you going to identify the children of houseowners?” asked Kok.

It would be better, he said, if the service was free for everyone."
at 4:39 AM No comments:

Big Idea No. 1: A 'less-car' Singapore: "ONE little known fact about Singapore is that it has one of the highest car ownership populations in the world for a city. (Repeat: For a city, and not for a country.)

Mr Chow also notes the contrast between Singapore and other cities: ''From London to Hong Kong, only the top 10 to 20 per cent of household dwellings come with carparks. Without a carpark, residents just simply cannot buy a car. In Singapore, the Government has so generously provided abundant and cheap residential carparking in the HDB estates over the years. From New York to Tokyo, office buildings are deliberately built with few or no carparks.

''In Singapore, that is not the case. Even middle managers can drive their cars to work and park their cars in office building carparks for the whole day.'' 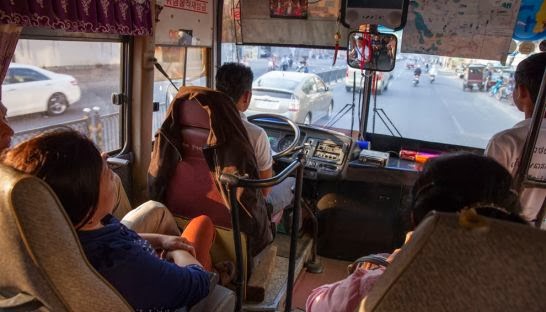 Charlotte Pert
Bus trial shifts into first gear, National, Phnom Penh Post: "“I have my moto already, but I want to ride the bus, because I want to [ride] with my friends.

“I think it’s cheaper also, because it’s only 1,500 riel,” she said, adding that the bus was “more comfortable” than a tuk-tuk.

The added safety of the bus was also a major draw, Pisey continued.

“I want to ask you, my friends… to take the bus,” - Jakarta deputy governor 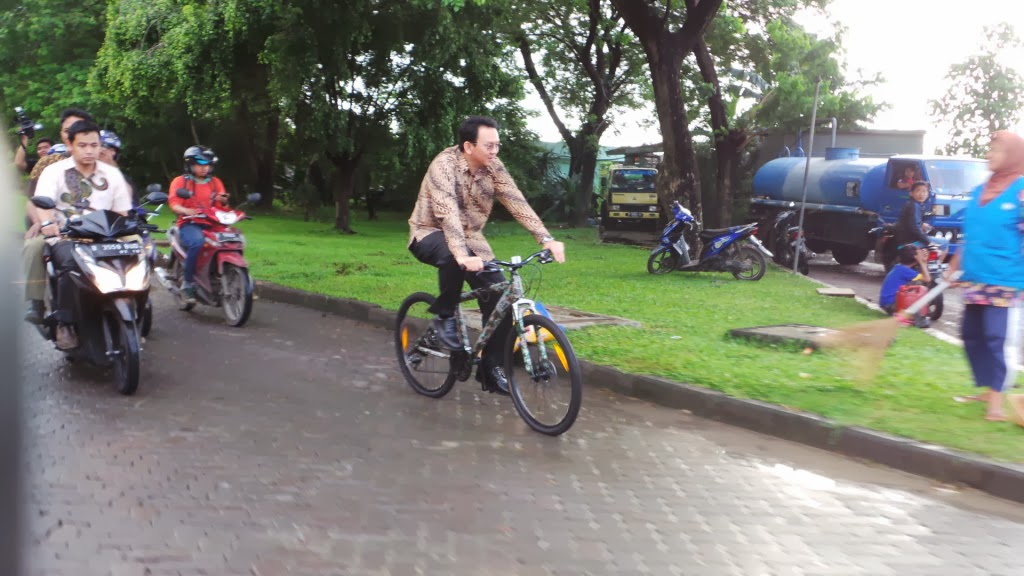 (JG Photo/Lenny Tristia Tambun)
Basuki Rides the Bus, Embraces Public Transit Regulation for Jakarta Officials - The Jakarta Globe: "Jakarta. Although Basuki Tjahaja Purnama was slow to embrace a city-wide regulation requiring municipal employees to use public transportation on Fridays, the capital’s deputy governor rode a bus to work today and said he had a “pleasant” time doing so.