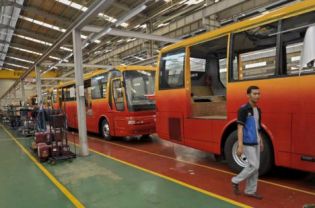 Public transportation is set to receive Rp 3 trillion in funds
for the 2012 Jakarta budget, the governor said on Friday. (AFP Photo)
Flooding, Public Transit Dominate Jakarta Draft Budget | The Jakarta Globe: "Of the eight programs, public transportation would get the most funding, at Rp 2.89 trillion. Fauzi said they wanted to develop three new TransJakarta busway corridors — one of which would go to Bekasi and another to Tangerang — buy land for a fourth corridor and adapt pillars intended for the scrapped monorail project into an elevated busway track. The city also wants to buy new buses for the TransJakarta network."